Now that the conference is over processing what has transpired and the weight of some of the events is now being felt. One really wonderful event was participating in the Regional MFA Exhibition (please see Patricia Flores earlier post regarding the opening). In the expansive Hunter College / Times Square gallery space was at a premium with 20 institutions participating, and that was just concerning the artwork; the minute the reception began the gallery goers packed the space, making it an athletic feat to snake through the galleries, weave through the people and not bump into the artworks.
Patricia mentioned that the exhibition, between all of the schools, the artwork included feels very in tune with the currents of contemporary trends in New York work. I felt similarly when viewing some of the work and a comment that I overheard months before in a gallery came to mind: “it looks like MFA work.” This has passed through my mind quite a bit since first hearing it. Is there a MFA aesthetic? If so, what does it mean; a derogatory comment or some phase of artistic development that everyone goes through?” My thoughts and comments aren’t meant to be a defensive response to Patricia’s post, but a search for other people’s perspective on the MFA period of artistic development. Please discuss if you feel so inclined.

Posted in Exhibitions | Comments Off

Attend or not attend.

This conference was an eye opening experience and one that I will continually be pondering over the next months and leading up to my decision to attend Los Angeles or not. In an earlier post I defined my mission CAA as one to determine how the conference can best serve current MFA students and recent graduates (focusing on MFA because that is my perspective). Being situated close to New York gave a great advantage of being able to glimpse the conference at a calculated distance. I was able to completely geek out and attend some really great panels but also snoop around, have casual chats with folks about what they wish to get from the conference.

For most, the conference was about meeting people. Old friends, making new ones, and hopefully ones that may hire them in the near future. In these small conversations little bits of information flowed effortlessly for those who were asked, “should an MFA candidate attend the CAA conference while in her last year, months before graduation?” Yes. Do it. But these answers came with a few qualifiers. Make sure to scout the job listings early, in November, apply, and hopefully someone will bite. But most importantly, let those potential employers know that you are planning to attend CAA. Secondly, if you do attend, go to the career mentoring sessions and workshops. At these meetings you are able to bring a résumé, sample cover letter and portfolio for review from someone who has seen hundreds, maybe even thousands of them and able to give a kick in the pants to get your items in order, or reassure you that everything is looking stellar.

One kind woman give one last reminder: remember to have some fun and see what’s going on outside of the conference at museums and galleries. Take advantage of the fact you are in a great art center, whether it be this year in New York, next in Los Angeles, and after that Chicago (?).

Images as promised and a little further explanation of the “Five Rhythms” movements. Antoni explained that each of the five movements grow out of the previous. Beginning with flow, staccato, chaos, lyrical, and ending with stillness, the dancer of the “Five Rhythms” puts her body in motion in order to get a greater understanding of presentness and to ground the mind back within the body. 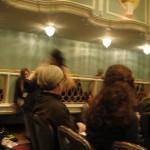 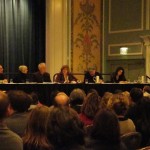 Posted in Photos, Sessions | Comments Off

Just want to share a small observation that has come encapsulate the experience of a CAA conference. While milling around the Hilton, utterly astounded by the sheer number of folks, I glanced to the escalators, when I spied two gentleman, one ascending and another headed below. In their moment of recognizing a friend, they perfectly timed a handshake across the handrails and a quick salutation as they passed each other. How quick one needs to be to see a colleague, learn that a person standing in the corner is well respected scholar, writer, artist, teacher, make the gesture of saying hello and introducing oneself.

This morning’s art star super panel of Petah Coyne, Philip Taaffe, Vija Celmins, Robert Gober, Janine Antoni and moderated by Albright-Knox’s Douglas Dreishpoon unfolded into a lively discussion on what happens when each artist isn’t in focused used on art. The instance in which an artist isn’t actively producing artwork is typically a taboo subject; just broaching the topic is considered an invitation for that nasty, creative-sucking spirit to befall whoever allows such blasphemy to pass through their lips. Thankfully this morning’s panel generously shared what their experiences are when things just art clicking in the studio. There was a collective sigh of relief; we are not alone in our days slogging through work that is so bad it should never see the light of day.

Dreishpoon opened the discussion by sharing the big question he asked each panelist to respond to: what happens when creativity is a struggle? Each artist responded in varying ways, some addressing the attempts to get back on course, others how these instances happen in the first place.

Petah Coyne shared three words that are scribed above the threshold of her studio door studio door: playful, present and wander. Not only was a strong curiosity of the world instilled within Coyne as a young child, but also “a habit of being.” Throughout her presentation, it became clear that Coyne allows her three words to pervade her artwork, imbuing the pieces with playful references to people and wandering stories that influence each piece, allowing those memories to always be present.

Coyne’s process of overcoming a block was noted by Philip Taaffe as one that is much more proactive than his own. Preferring to step back when creative projects aren’t going as planned, Taaffe advocates for establishing a “a contemplative habit of mind.” whenever these moments of artistic drought plague us, we should make ourselves open to being in a place and allowing something, anything to happen.

Celmins took a more direct approach in addressing Dreishpoon’s question, by creating a list of what she does when not working. Gardening and developing a little plot of land outside of a small cottage is Celmin’s remedy. She attributes this retreat to gardening to lack of open space living in urban areas for most of her life.

Three instances of extended time away from the studio were shared by Gober. The first, after his exhibition that was part of the 2002 Venice Biennale (coincidently he took up gardening at this time too). The next brief departure was for a road trip across the United States, filled with stops at artists’ homes and landmarks along with visits to New Orleans in the months after Katrina and to Laramie, North Dakota. Finally he spoke about his current curatorial projects. Each of these three instances have there own divergent reasons for why artwork proves impossible to complete; the utter exhaustion after a major exhibition and tight deadline, the breaks needed to connect to the world at large, and new creative projects that become jobs that take over.

Finally, Janine Antoni spoke about a parallel practice she maintains alongside her artwork, the endeavor to cultivate what Jung calls the “active imagination,” allowing the unconscious to come to the surface and to come to terms with what rises to the top. Antoni does this through dancing through the Five Rhythms, which Antoni demonstrated for the audience. The dance is developed by artist and dancer Gabrielle Roth is centered on five movements, dancing through all five movements allows Antoni to move into a transcendent state, giving visions and kinesthetic experiences that fuel her artwork.

Such a lengthy post I know, but so much to chew on from this two hour panel. Some of the common themes brought up were the importance of connection with memory and using it as a springboard to jump forward; and returning to more grounded states, physically and metaphorically.

Images of the panel to come this evening, including one of Antoni dancing…